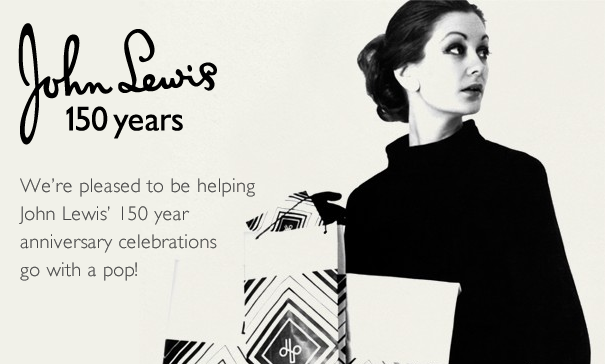 John Lewis has launched a series of commemorative events in honour of  its 150 year anniversary, to celebrate how the business has grown from a small draper’s shop opened in 1864 to an internationally acclaimed company.

The range of activities, which kicked off on May 3,  includes an interactive exhibition at the Oxford Street flagship, where shoppers will be taken from John Lewis’ origins into the future, with a prediction of how retail will look in 2164. “It gives a real insight to what shopping over our 150 years has looked and felt like, and an opportunity for people to see a little bit more behind the John Lewis story,” said Simon Fowler, the store’s managing director. Also, for the first time ever, the rooftop of the Oxford Street store will be opened to the public, as John Lewis teamed up with Tony Woods, the royal Horticultural Society National Younger Designer of the Year, to transform the urban rooftop and offer its visitors unique views of the city. John Lewis has teamed up with a number of British brands and designers, such as Ted Baker, Liz Earle and Jo Malone, to offer exclusive products that celebrate the anniversary. From a range of specially designed homeware goods such as a Kenwood stand mixer, a Smeg fridge and a Silver Cross pram to a capsule collection of exclusive products based on vintage prints from fashion designers including Lucienne Day and Alice Temperley, John Lewis aims to showcase the sort of products that distinguish it from its rivals. Get 3% KidStart Savings at John Lewis for a limited time > Being renowned for the excellent quality of its TV ads, John Lewis couldn’t miss the opportunity of its 150th anniversary to launch a new masterpiece. The advert entitled “Never Standing Still”, tells the story John Lewis has played in people’s lives since the first store opened on 2 May 1864 on London’s Oxford Street, celebrating its role through generations. Craig Inglis, the marketing director at John Lewis, said: “This campaign celebrates how our customers’ lives have kept moving over the last 150 years.” The ad’s closing titles read: “For 150 years you’ve never stood still. Neither have we.”