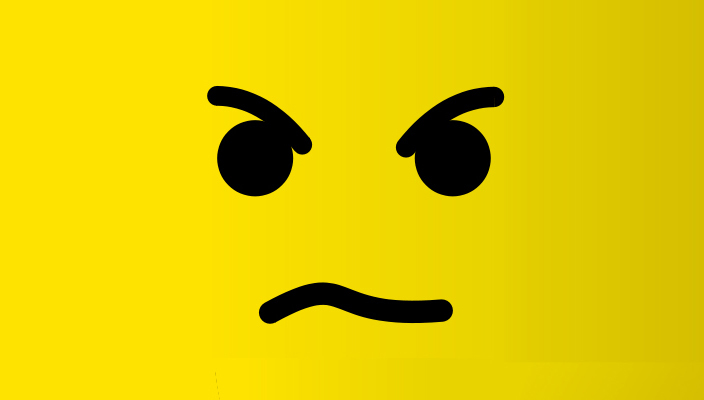 I love the piece in today’s Guardian that says angry faces on Lego toys are on the rise.

Apparently, researchers have found cross faces on various Lego pieces are on the increase with both ‘good’ and ‘bad’ Lego characters now carrying a large range of emotions. Something that is suprisingly angering many parents. Personally I’ve never really understood why toys don’t reflect the whole gauntlet of emotions from anger through to happiness and I suspect it has a lot to do with the fact people still think kids should be happy and think happy thoughts all the time. A case in point happened a few days ago when my 3 year old was in a really bad mood on the school run. He was grumpy because he’d scraped his knees in a fall, cross because he was on a scooter ban and basically did not feel like smiling at anyone. About a dozen mums asked why he wasn’t happy. I pointed out he was having a bad day just like we all have and one mum said, “He should be happy all the time. What has he got to worry about?” It’s not the healthiest of attitudes to have when trying to teach kids to manage, and acknowledge their emotions. My own childhood was a lesson in suppressed emotions – where acknowledging you were angry, frustrated or upset wasn’t really acceptable. The result being a whole range of issues that my brothers and I then took into adulthood. The fact is small children find it hard to handle their emotions, which is why they often have temper tantrums, whinge and cry. It’s only by allowing them to acknowledge what they are feeling and name it, that they can then get past the rage/tears/anger and learn to manage conflicting feelings.

This isn’t liberal nonsense but the way we all learn to regulate our emotions (and so not fly into a rage as adults), which means top marks for Lego for giving kids a helping hand.

But what do you think? Should toys reflect a range of emotions or not?
To continue reading this article
Open a KidStart account
Get money back for your children from all your online shopping.
Save with over 2,300 retailers
Invite family to save too - grandparents love to help out!
Register
If you already have an account with KidStart, just log in.