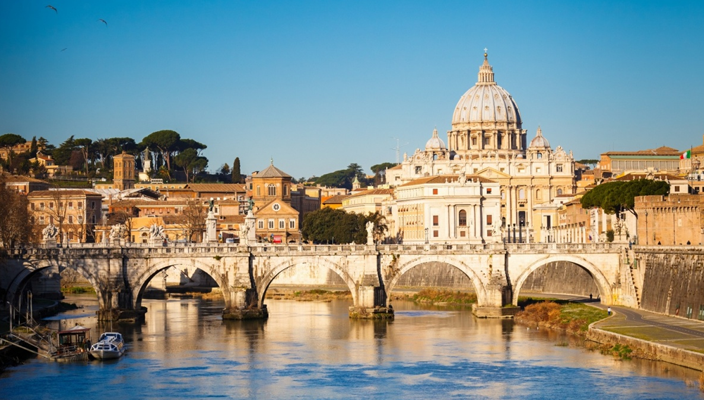 Rome is the city with the highest concentration of historical and architectural landmarks in the world. It’s also the heart of Catholic Christianity, and the only city in the world to host a foreign state within itself, the enclave of Vatican City. For this reason it is often referred to as the capital of two states. Over 16% of the world’s cultural heritage is located in Rome (70% in Italy). That’s why it would be almost impossible to list everything you should visit when in Rome. For the purpose of this post, we’ve chosen the most popular and important places and monuments you can’t really miss. The Flavian Amphitheater, better known as the Colosseum, is one of the most famous Roman monuments in the world. The building was intended for fighting and games between gladiators and simulations of hunting wild and exotic animals. The arena was built with a large wooden table covered in sand. In the basement there was a long series of tunnels in which the wild beasts were kept, as well as the stage equipment. The entrance and exit of around 73,000 spectators and the turnout in the auditorium were regulated by a complex system of ingresses to the ground floor and internal passages. Each spectator was given a ticket where he was shown the path to follow. According to Roman mythology, the Palatine is the birthplace of Romulus and Remus, the brothers breastfed  by a wolf,  who were to become the founders of the city. Between myth and reality, the Palatine Hill is without a doubt one of the most beautiful places in the city.  Home to the houses of the ruling class of ancient Rome, and afterwards the gardens of the Farnese family, today the Palatine Hill is a true open air museum. The vestiges of the past are, in fact, surrounded by green lush vegetation that extends along the slopes of the hill, from which you can enjoy breathtaking views of the entire archaeological area below. Rome is famous for its many magnificent churches. However, nothing can compare to St Peter’s Basilica (Basilica di San Pietro), Italy’s largest, richest and most spectacular church. Originally  founded around 320 by the Emperor Constantine, it contains some spectacular works of art, including three of Italy’s most celebrated masterpieces: Michelangelo’s Pietà , his breathtaking dome, and Bernini’s baldachin (canopy) over the papal altar. The magnificent and vast Vatican Museums are one of the largest and most interesting museum complexes in the world. And for this reason the queues are really long, especially during the high season such as Christmas, Easter and during spring. The complex of the Vatican museums encloses several museums: Museo Pio Clementino Museum Chiaramonti, Gregorian Etruscan Museum, Gregorian Egyptian Museum, Gregorian Profane Museum, Pio Christian Museum, Ethnological Missionary Museum, Collection of Modern Religious Art, Upper Galleries, Museum the Vatican Library, Art Gallery and of course the incomparable Sistine Chapel. One day won’t be enough to visit them all, so you should establish from the beginning what you want to see to make the most of your visit. Elegance is without a doubt the main feature of Piazza di Spagna. The square, surrounded by ocher-colored buildings, features the Bernini’s fountain and the famous staircase on which stands the church Trinita dei Monti. It is no coincidence that the high fashion designer labels such as Gucci, Bulgari and Valentino chose to place their flagship stores just off the square. Former home of famous poets such as John Keats and Percy Bysshe Shelley, the square is now a cultural heritage of inestimable value. Located at the foot of the hill of the Pincio, Piazza di Spagna has always been the center of cultural life and tourism in the city of Rome. The zoo of Rome is one of the ideal places to spend some quality time with the family and a fun way for the kids to learn about the animal world. The zoo, better known as Bio-park, is one of the oldest and most important ones across Europe since its opening back in 1911. It’s located within the Roman Villa Borghese and covers approximately 18 acres with more than 1,000 animals belonging to 200 different species. Among the areas dedicated to the animals are the Forest of the Wolves, the House of the Giraffe, the Valley of the Bears and many more. There are also areas for leisure activities, an amphitheatre, a bar and a picnic area full of toys for the little ones, as well as a mini playground. If you ever visit Rome, you can’t leave without eating at least once at ‘Pizzeria da Remo’. This is the place not only to have the best pizza in Rome, but also to experience the true roman, genuine, local atmosphere of this beautiful city. Their pizza has a thin crust, perfectly cooked and topped with delicious, locally sourced ingredients. And it’s excellent value for money: 11 euro for pizza and beer! Expect to queue for a table as the place it’s always busy but definitely worth the wait!

Get up to 3.5% back for your kids with Thomas Cook through KidStart >