The superhero inside all of us 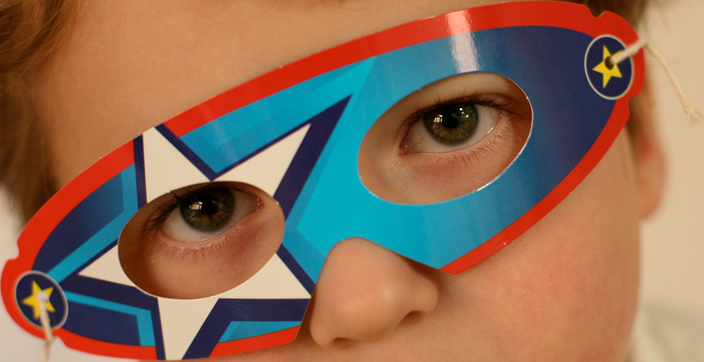 During the summer holidays, my two eldest girls are going to ’Kids Club’ three days a week so that I can continue to work.  Each week there is a different theme, and this week it’s ‘Comic Books’.

When they came home yesterday, full of energy and shouting their enthusiasm for how much fun they’d had, they eagerly waved pieces of paper under my nose showing me the superheros that they’d drawn and coloured in. This morning, after I’d taken my daughter Lola to nursery and the other two had finished their breakfast, Ella wanted to draw another superhero to take in to show her teachers.  All was quiet for a short while and then she began getting frustrated because her picture wasn’t turning out how she wanted it to.  She proceeded to get really quite cross (with herself), throwing her pencil across the table and bursting into tears.

“I can’t do it!” she wailed.  This is quite a common occurrence in our house, and if I’m completely honest I don’t always have the time or the patience to help her understand what she’s thinking and feeling and help her work through it.

Today though, I decided that I did.

So I gave her a hug and sat down at the table next to her.  I told her the story of Thomas Edison trying to invent the lightbulb.  I asked her how many times she thought he might have tried to do it before he got it to work.  Ella stopped sniffing and looked at me, and I could practically see her brain working as she worked out in her head how many times he might have attempted to create his invention.  “Five tries” she said, confidently.  My other daughter Mimi’s curiosity had been piqued by this point, so she sidled over shyly and guessed 20 and then 30 tries.  When I told them it had taken Edison 10,000 tries before he’d got his idea to work properly, their eyes widened in astonishment.  “So even though it didn’t work all those times,” I said “he kept on trying and kept on trying, because he believed that he could do it.  And then, finally, when he tried something he hadn’t tried before, he did it!”. This sparked off a conversation about how she could keep trying the same thing over and over, and it would keep on turning out in a way that she didn’t want, or she could try and do it differently and maybe it would start to end up how she wanted it to be.  “Because if we keep on doing what we’ve always done, we’ll keep on ending up with what we’ve always had” I said.  “What are you talking about Mummy?” she asked impatiently, eager to get on with doing her drawing.  (Ok, so maybe that suggestion might have been a bit much for a 6 year old at 8am on a Tuesday morning!) As Ella and Mimi settled back down in their seats to continue with their pictures, we got talking about superheros and superpowers.  I commented that if I was a superhero my superpower would be the ability to help everybody find happiness.  Mimi said her superpower would be saving people from danger, “especially if rocks are falling on top of them Mummy, I’d push them out of the way”. I asked Ella what her superpower would be.  She didn’t answer, just carried on absentmindedly doodling on the paper in paper in front of her.  I left her to it and quietly went back to getting their bags ready for Kids Club as there were only a few minutes left before we needed to leave. A couple of seconds later I felt a little tug on my hand.  I crouched down to her level and she put her hands on my shoulders and whispered in my ear “If I had a superpower Mummy, it would be to help people not give up when something is hard or when something doesn’t go the way you want it to”. Then she showed me this picture of ‘Mr. Don’t Give Up’, her superhero: So now I’m going to ask you the same question I asked my girls:  If you were a superhero (and you already are, all of you!), what would your superpower be?